Grit and Glory: Celebrating 40 Years of the Edmonton Oilers 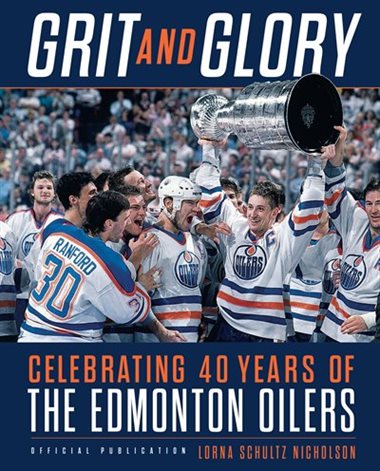 Order at Amazon.com
Order at Indigo

When the Edmonton Oilers joined the NHL in 1979, the team owner, Peter Pocklington, proclaimed they would win their first Stanley Cup within five years. A bold statement that turned out to be half right: they not only won the Cup in 1984, but won it four more times over the next six years, forging one of the most dominant dynasties ever.

The Oilers have always been a team of determination–fast scoring, hard hitting, and creative hockey that has earned them loyal fans across North America. The team has faced adversity, both on and off the ice. As a small market team, the Oilers have struggled to compete in the NHL, but always found a way. From the biggest trade in history that saw the Great One leave for L.A., to the eleventh hour negotiations that kept the team in Edmonton with a cadre of thirty-seven passionate owners–there is no club like it. And now with super star Connor McDavid leading the roster there’s never been greater promise for the future.

With forty years of NHL action this book is a journey back to the Oiler’s phenomenal highs and challenging lows, the larger than life characters and amazing records, to tell the remarkable story of the hardest working club in the game. Fully illustrated with rare and exciting images, and published in full partnership with the Edmonton Oilers, this is the must have book for Oilers fans, and hockey fans, everywhere.

← The Next Ones
We use cookies on our website to give you the most relevant experience by remembering your preferences and repeat visits. By clicking “Accept All”, you consent to the use of ALL the cookies. However, you may visit "Cookie Settings" to provide a controlled consent.
Cookie SettingsAccept All
Manage consent

This website uses cookies to improve your experience while you navigate through the website. Out of these, the cookies that are categorized as necessary are stored on your browser as they are essential for the working of basic functionalities of the website. We also use third-party cookies that help us analyze and understand how you use this website. These cookies will be stored in your browser only with your consent. You also have the option to opt-out of these cookies. But opting out of some of these cookies may affect your browsing experience.
Necessary Always Enabled
Necessary cookies are absolutely essential for the website to function properly. This category only includes cookies that ensures basic functionalities and security features of the website. These cookies do not store any personal information.
Non-necessary
Any cookies that may not be particularly necessary for the website to function and is used specifically to collect user personal data via analytics, ads, other embedded contents are termed as non-necessary cookies. It is mandatory to procure user consent prior to running these cookies on your website.
SAVE & ACCEPT